Sandra Bullock and Daniel Radcliffe at the Lost City premiere. Bullock and Radcliffe attended the SXSW Film Festival at the Paramount Theater in Austin on Saturday for the premiere of their latest movie.

Sandra Bullock and Daniel Radcliffe at the Lost City premiere The 57-year-old actress and her 32-year-old costar, posed for the cameras at the event, Sandra looked more serious than Daniel and the rest of the cast, although in other photos she is seen smiling. Maybe she told him that her outfit was horrendous…lol! 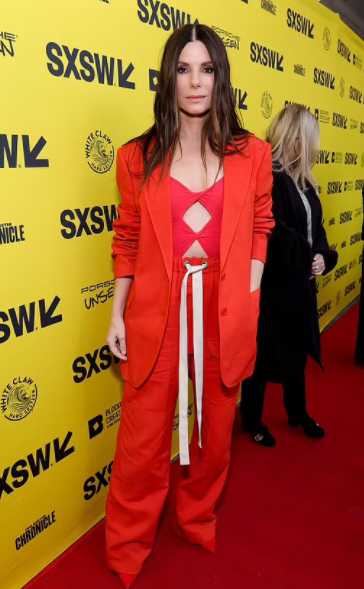 The film, which is a comedy, will also star Channing ‘Potato’ Tatum and Brad Pitt, and is expected to open in theaters later this month.

Lost City is about novelist Loretta Sage (Bullock) who embarks on a book tour with model Alan Caprison (Potato). When the writer is kidnapped by millionaire Fairfax (Radcliffe), Caprison decides to rescue her from her despite her lack of survival skills.

During a question-and-answer session after the premiere, Sandra revealed that Brad Pitt was her eighth choice to play the former NAVY seal who helps Tatum’s character rescue her.

“He and I have the same hairdresser. She told her to make my movie and she told me to make her movie. It’s not a joke, that’s how it happened “revealed Sandra.

In another revelation that the Oscar winner made to the public, she said that she will be concentrating on her family and will probably wait to make another movie until her children, Louis, 11, and Laila, 8, are in their teens, at around 16 or 17 years. By then Sandra will be about 62 years old…

This is the trailer for the movie “Lost City” by Sandra Bullock, Daniel Radcliffe and Channing Potato… Bahahahaha… Brad and his long hair… love it!

So, Sandra Bullock and Daniel Radcliffe at the Lost City premiere.